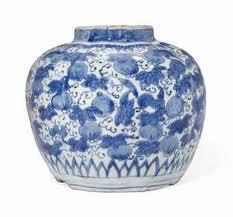 Wanli was Emperor Longqing’s third son and the 13th Emperor to rule the Ming Dynasty. He was just 9 years old when he ascended the throne, which meant that he was mainly aided in running the Empire by a statesman named Zhang Juzheng. Juzheng died shortly after Wanli turned 19, which left Wanli with full control of the state affairs. Fortunately, he proved himself to be a capable and diligent ruler, allowing the Ming Dynasty to prosper during the early part of his reign. Between 1600 and 1619, however the Emperor started becoming disenchanted and alienated from the court, going as far as extorting money from the government and his own people. This led to conflicts with powerful government ministers who eventually forced him to give up his throne.

The blue-and-white wares of the Wanli period made for the Imperial palace maintained the standard of the two preceding reigns: a fine body, a brilliant glaze, decoration in a deep, violet-tinged blue. But such pieces are rare, the difficulty potters experienced in finding the appropriate clay began to cause a lowering of standard.

The mass growth of export trade in porcelain was also detrimental to the quality. Mass production is evident on most pieces, the poor quality of the clay, improper refinement of the materials left pinholes and large dark blemishes on the surface, the decoration was overly simple and repetitive. This type of ware was known as kraak porcelain, and formed the backbone of the export market until 1657. The name derives from the ships which were used by Portuguese traders to import china into Holland. The ships were called caraques or kraaks by the Dutch, who redistributed the porcelain across Europe. By the 17th century the Dutch supplanted the Portuguese in this trade.

In addition to decline in porcelain quality, the blue colour grew more faded. Applied in a wash, it sometimes looks watered down, in compositions that repeat the traditional and now stereotyped decoration, of dragons, phonixes, and other Daoist religious symbols. The body is heavy and the style conventional. But there is far more inspiration in scenes of everyday life, with figures of children and adults and “naturalistic” flowers and plants.

Some more delicate pieces such as stem-cups, incense burners, attributed to the reign of Wanli, bear the Xuande or Chenghua marks. They are among the most successful pieces of Wanli reign. The shapes, including dishes, jars, bottles, bowls, gourds, basins, fish bowls, are little different from the earlier forms. The repeated presence of shapes in imitation of archaic bronze does, however, suggest impoverishment of creative imagination.