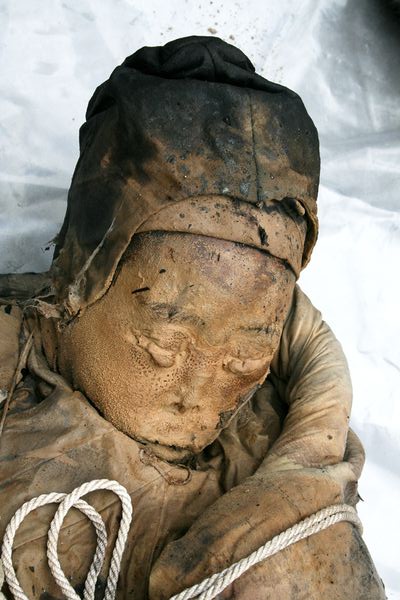 With eyebrows, hair, and skin still intact after more than 600 years, a remarkably preserved Chinese “wet mummy” remains bundled in her quilt after centuries in a flooded coffin.

Removed from her wooden casket on March 1, the body had been found in a tomb accidentally uncovered by roadbuilders near the city of Taizhou.

“Wet mummies survive so well because of the anaerobic conditions of their burials,” said archaeologist Victor Mair. That is, water unusually void of oxygen inhibits bacteria that would normally break down a body.

Unlike ancient Egyptian mummies, the corpse—likely from the Ming dynasty (1368 to 1644)—was probably preserved only accidentally, said Mair, of the University of Pennsylvania.

“I don’t know of any evidence that Chinese ever intentionally mummified their deceased,” he said. “Whoever happened to encounter the right environment might become a preserved corpse.”