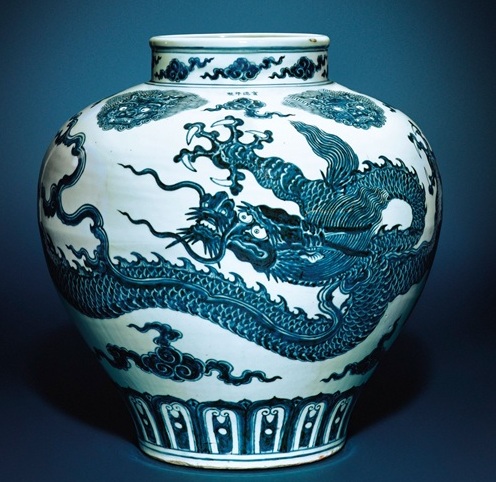 With its four powerful five-clawed feet and its head turning backwards, the dragon on this 15th-century jar is depicted with terrific dynamism. It appears to be an early variation of the forward-facing dragon found on blue and white ceramics developed from the Yuan period (1271-1368). The inspiration for such an unusually portrayed dragon probably originated from Southern Song (1127-1279) paintings.
The jar contains details that have not been seen before on porcelain of previous dynasties — short spiky bristles in front of tufts of long flowing hair at the elbows of the dragon, for example. These details do, however, appear on the dragons in paintings by Chen Rong (circa 1200-1266), which were widely admired and had provided inspiration since the Song and Yuan periods.

Xuande-period porcelains were low in calcium and high in potassium, which made them more translucent.

Many connoisseurs consider the painting of dragons on Xuande imperial porcelain to be the finest in the history of Chinese porcelain, and this example has exceptional vitality.