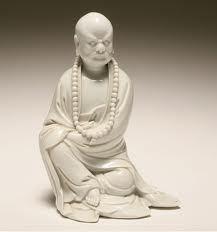 The white ware made at Jingdezhen in the Ming period takes its inspiration from the shufu wares produced under the Yuan. The body is fine-grained, the glaze thick with small ripples called “orange peel”. Some pieces have anhua or “hidden” decoration, so called because it is only visible against the light. The motifs are very lightly incised on the body. They are sometimes moulded in very light relief, scarcely perceptible beneath the glaze.

The manufacture of these white wares went on through the course of the whole dynasty. In the Yongle period (1403-24) the glaze was a slightly bluish-white, while under Chenghua it had a slightly buff tint due to oxidation firing. The glaze often had little pin holes; these do not exist in the chalky or “skimmed milk” copies of the 18th Century.

The production at Jindezhen eclipsed that of most of the provincial kilns. There was, however, one manufacture in the south, that of Dehua in the southern province of Fujian which is distinguished by a large production of Blanc de Chine (or Dehua ware) with a heavy, dense body and a milky white glaze. It often has fire marks at the base of statuettes, these are unintentional flaws, but they serve as proofs of authenticity.

Apart from the fine white, creamy glaze of the porcelain, the most distinguishing characteristic of Blanc de Chine is the sculptural nature of the work. The Dehua craftsmen were highly adept at producing finely detailed sculptural images. Many Taoist and Buddhist societies in the area of Fuijian commissioned various sculptural icons of deities, saints, immortals and objects of their faith in the Blanc de Chine style.

The technique for producing Blanc de Chine involved molding of shapes in clay. The mold would normally be in two parts, but more complex pieces required more parts. The craftsman would apply a thick layer of clay (quarter inch or more) inside both molds, taking care to register all the details from the mold onto the clay. When the clay reaches leather-hard state (moist but hard enough to handle without deformation) the parts are extracted from the mold, and then cut, trimmed and fused together. At this stage, fine hand made details are added on. The piece would then be let to dry, after which it would be further trimmed, sanded and polished. The last stage involved applying the glaze to the sculpted object. The final product had the impression that the entire image has been created from scratch in one go, as all the fine hand made details would not have been possible to create purely by moulding.

Although previously thought of as being made during the Ming period, due to some pieces bearing Ming Imperial marks, the Dehua wares were actually produced during the second half of 17th century. Dated pieces are very rare, only five or six are known, with the inscription written in brown on a thin white glaze.

The kilns of Dehua have virtually never ceased production from the 15th century till today. The potters, attached to their traditions, faithfully reproduced old models, and for this reason it will always be difficult to date Fujian Blanc de Chine. It is generally thought that the statuettes and oldest objects have a creamy tint, but this criterion is not always correct. It does, however, seem that the late pieces have a more uniform slightly bluish glaze.