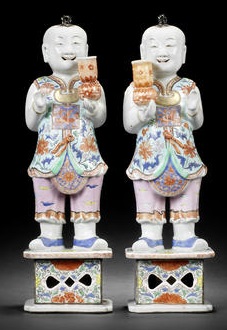 The laughing twins are the Immortals Hehe Erxian who represent harmony and mirth as well as bestowing blessing on marriages. The word he is the homonym for ‘union’, while erxian means ‘the two holy ones’. They actually represent the two famous poet-monks of the Tang Dynasty, Hanshan and Shide.

During the Ming and Qing dynasties, the twins were usually depicted holding a box and a lotus stem.

Two Gods of He and Ho

There are a number of legendary tales behind two celestial beings of He and Ho, among them there is one regarding the two monks living a secluded life in Mountain Tiantai in the Tang Dynasty by the name of Hanshan and Shide and no one know about their subsequent whereabouts. The story is based on Poems of Hanshan and Shide composed by Lv Qiuyin.

In times of wedding ceremonies and grand opening of shops, people would prefer to use image of these two gods. There is also another legendary story that Hanshan and Shide were best friends and they fell in love with the same girl and none of them knew it. As Hanshan was about to marry the girl, he came into knowledge of the reason and then abandoned his family and became a monk in Suzhou. After finding out the whereabouts of Hanshan, Shide, holding a blossoming lotus flower, went to visit Hanshan and was greeted by the latter who held a meal bowl. They were extremely excited to see each other and decided to become monks together and set up Hanshan Temple. Because the two of them were holding lotus and bowl (He, Ho sound in Chinese), they were dubbed two gods of He and Ho. Later, people changed their images into two young kids holding a lotus and a treasure box. Lotus flower and young kid imply lotus giving birth to a son and the five bats flying out of the box mean dawn of five blessings (blessing and bat share the same pronunciation in Chinese). From then onwards, the artistic processing of two gods of He and Ho thus has become the images adored by people.