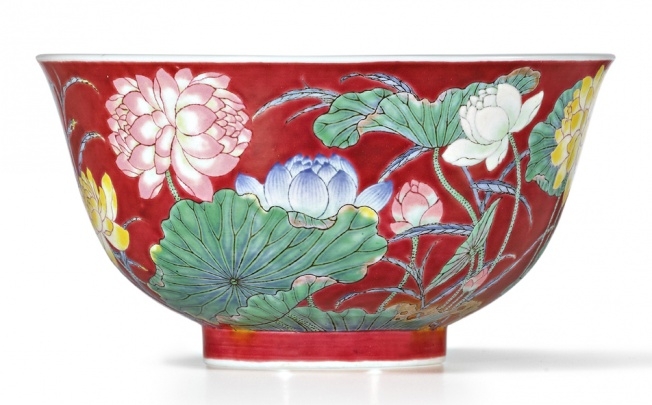 Falangcai of the Kangxi reign are among the rarest and most dazzling ceramic wares of the Qing dynasty. Unlike most other wares of that period, they were individually produced, subject to close scrutiny by the Emperor and each piece is unique. The record-setting bowl is one of the earliest examples of Western enameling injected into imperial ceramics.

The Wall Street Journal reports that Chak intends to resell the bowl in five years’ time: “I don’t think there is a bubble for these kinds of big items. In five years, the price will be up,” said the dealer.

(Admin says) – I know I would rather have my money invested in a top end piece like this for the next 5 years than sitting in a bank.

Hongkonger William Chak Kin-man, who last month set a world record when he paid HK$74 million for a porcelain bowl that dates back about 300 years, is a celebrity on the mainland.

Wherever he goes, people recognise him and pull out photos of their ceramics on their smartphones for him to appraise on the spot – which he always happily does for free.

Some 60 million viewers watch his weekly Beijing TV show Tianxia Shoucang (World Collection) in which people bring Chak their ceramics to value. If their goods turns out to be fake, they’re destroyed with a sledgehammer. 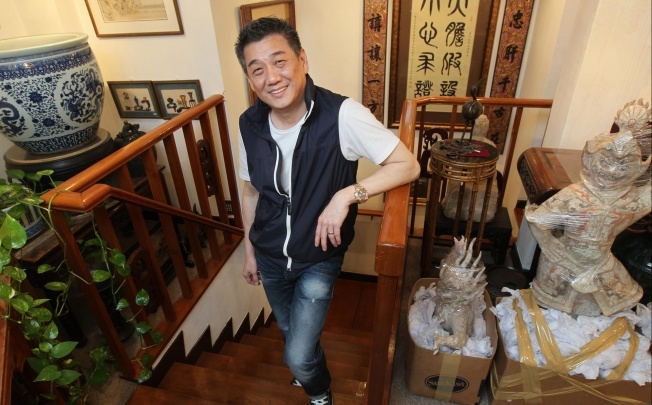 His family is originally from Shandong province, but his parents fled to Macau during the Chinese civil war. Chak was born there, but the family moved to Hong Kong when he was just 10 years old.

His father’s failing health meant that Chak, like many teenagers at the time, had to drop out of secondary school at 16 to support his family. His first job in 1972 saw him learn to speak English in order to sell Chinese embroidered tablecloths to Western tourists in Tsim Sha Tsui.

The next year, he became an apprentice under antiques dealer “Master Wong”, cleaning, packaging and delivering goods in the day and sleeping in the shop at night to guard the merchandise.

After he married and needed to support a growing family, he left to work as a freelance ceramics dealer. He developed a reputation for expertise beyond his years and for being honest. He opened his first shop on Hollywood Road in 1988 and has been Hong Kong’s preeminent dealer and collector ever since.

“Wealthier people on the mainland already have a house, a car, a watch; they don’t trust stocks and can’t buy that many houses. For a secondary investment, there’s nothing better than antiques,” he says.

“There’s no such thing as an expensive antique. If it’s real, it’ll have a real price that will on average double in value in five years.”

His firm, Chak’s Company Limited, attends nearly 100 auctions around the world each year, and seven out of 10 times it is there on behalf of mainland clients who flock to him and other Hong Kong-based dealers for help because they don’t trust mainland experts.

Chak said many mainland dealers cheat their customers or lack the expertise to detect fakes. Others work with criminals who steal antiques from heritage sites.

William Chak flies off to London this week for several Christie’s and Sotheby’s auctions.

Having now been in the industry for 40 years, Chak has witnessed the changes and developments in the antiques markets. He sees the prices for antique porcelain today as normal, not inflated.

Last month, Chak bought a sublime blue and white “Palace” bowl from the Chenghua period of the Ming Dynasty (1368-1644) at a price of HK$141 million ($18 million) for one of his clients at Sotheby’s Fine Chinese Ceramics and Works of Art Auction in Hong Kong.

“I had the chance to meet that particular Chenghua bowl once in 1981 and it was sold for more than HK$400 million, the highest price that day, exactly the same as a month ago. What’s the concept of 400 million in 1981?”

In the years when he had the chance to travel to Europe, Chak was a regular at all the big museums in the UK, such as the British Museum and the Victoria and Albert Museum. This, coupled with his 25 years owning Chak’s Company Limited, his dealership in Hong Kong, has given him a fine sensitivity to the shape and body of different antiques.

When discerning a fake from an authentic piece of art, the first thing he checks is the body. Next he examines the material and the pattern on the surface, then the foot, the stamp and the weight.

“No matter how technology develops, judgment by the eyes will still be very important,” he said.

Chak first entered the antiques industry in the 1970s, when he started apprenticing at an antiques shop. He was just a teenager at the time, but wanted to help out his family.

He quickly picked up the basics, and when his mentor emigrated to Australia in the 1980s, Chak continued as a private dealer, then established Chak’s Company Limited in 1988, which he still runs today.

Many of the customers who first knew Chak as an apprentice came in for his advice on Chinese porcelain. Chak gained a reputation for his sharp eye and tips on what to buy and how much to pay.

Going into the 2000s, as the number of collectors in the Chinese mainland grew, Chak became a sought-after expert.

His name spread quickly through recommendations and word of mouth, all based on credibility. This comes into play when a client may not be present at an auction, and has to trust that Chak will act in their best interests.

Chak recognizes that even credible art appraisers can mess up.

“Everybody makes mistakes. I still do, small ones,” he said. “A lot of experts refuse to admit it when they make a mistake. I dared to admit it when I was wrong, though it is really painful.”

Chak recalled his last mistake, at a New York auction a decade ago. He mistook a vase for authentic because it had the right base, but the neck was wrong. He took his error very seriously.

“It’s so painful that you want to stab yourself,” he said. “I thought I might never touch antiques again.”

His clients cover a broad age range. Many are second-generation collectors, following their fathers into the business.

Chak says his policy for picking clients is to become friends first. That’s because certain circumstances require a dealer to really understand each client’s preferences.

For example, Chak may be working with several clients but see only one item in an auction that merits a bid. He must use his understanding of his clients and their collections and aspirations to bid on the behalf of the person the object is best suited to.

“Being a dealer is not easy,” Chak concluded. “You need credibility, the ability to make shrewd judgments and morality.”