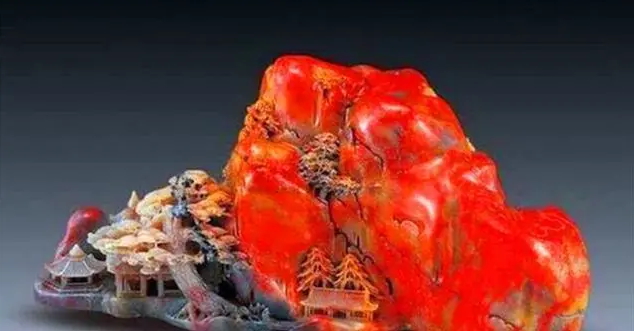 There have been very good fakes circulating around the antique industry with a few buyers getting badly burned and losing a lot of money, if you don’t know how to tell genuine chicken blood stone from fake it can be very costly for you.

Mr Huang was running a relatively new company when he was approached by a seller offering him a large piece of chicken blood stone carved as a mountainous scene for 15 million yuan.

After careful consideration Mr Huang decided to purchase the piece, he mortgaged his new business to the max and loaned money from friends and family members.

His friends and family thought he was crazy, even his wife left him because of the amount of debt he accumulated to buy the stone.

Mr Huang was now worried everyone would think he was crazy, he took his stone to a panel of experts who agreed the stone was not very old, but it was genuine and its large size and colour made it very rare and valuable. Moreover, the craftsmanship of the carving was superb.

The expert said if Mr Huang’s wife hears how valuable the stone is she will definitely return.