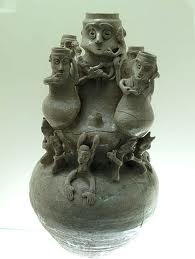 The Wuzhou kiln was situated in central Jinhua region of present day Zhejiang Province. Porcelain kilns spread throughout the area. Archaeological research has revealed a total of more than 600 ancient kiln sites, dating from Han to Ming Dynasties. This discovery revealed unusually numerous kilns that have been in service for very long periods, and held a relatively significant position in the history of ceramics.

Early specimens of Wuzhou kiln porcelain had light-gray glazes and were rather rough in texture. It had poorly tempered and under-vitrified clay with irregularities on the surface. Speckles often formed on the glaze of Wuzhou porcelain; they were green, sometimes with yellow mixed in. The many crackles on the surface, which often contained protruding yellow crystallized matters, were a unique feature of Wuzhou porcelain. By the middle phase of the development of Wuzhou kiln porcelain, porcelain clay resources in the area had become scattered and depleted, making it difficult to mine so the craftspeople used local red clay, which was easily mined, to model the bodies of the vessels. But since red clay contained high iron oxide and titanium oxide levels, it became dark purple after being fired, undermining the quality of the greenish glaze. A layer of fine white slip clay was, therefore, used to cover the body. With the cosmetic clay underneath, the glaze appeared smooth and soft, showing a little brown in green or yellow-green. However, the crackling and crystallization in the glaze was even more apparent when compared to porcelain wares that had porcelain clay for the bodies.

During the late period of the Wuzhou kilns, new models and types of porcelain vessels were created, which better exemplified the shiny glaze quality on top of thinner bodies. There were also new breakthroughs in decorative methods.

The Ou kilns were situated in the southern part of Zhejiang Province in the Wenzhou area. To its east were the great seas and its southern neighbour was the Fujian Province; on the north-west were the Koucang Mountains from which the Oujiang and Feiyunjiang rivers flowed straight out to sea. This area was one of ancient China’s trading ports; porcelain, shipbuilding, embroidery, and other handicrafts were all booming businesses here. Most of the Ou kilns were concentrated along the banks of Oujiang, Feiyunjiang and Nanxijiang rivers. As early as the Han Dynasty, the Yongjia area on the north shore of the Oujiang River produced primitive porcelain, which evolved into celadon by the end of the Han Dynasty. The products were transported by boats and rafts to Wenzhou and other cities for sale; transportation along the waterways was convenient and efficient. The body of Ou celadon was whitish with a hint of grey. The glaze was slightly green with high transparency. With such exceptional colour and luster, products of the Ou kilns were also called Piao porcelain.