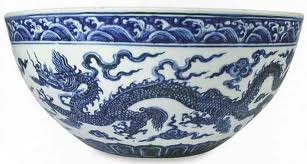 Xuande was the eldest son of Hongxi Emperor and was the fifth emperor to rule the Ming Dynasty. He strived to continue on the path of his grandfather Yongle Emperor’s “Golden Age”. Xuande was an accomplished painter and was fond of painting animals. He was regarded as the only Ming Emperor to display genuine artistic merit and interest.

Emperor Xuande also took a personal interest in porcelain. At Jingdezhen, some sixty kilns worked for the court. The majority of pieces bear the following mark transcription: Daming Xuande nianzhi (made during the Xuande reign of the Great Ming dynasty). It is neatly written, placed either under the base in two vertical lines, or near the outer rim in one horizontal line. Under Xuande, it became an established practice to mark ceramics; nevertheless authentic pieces without marks do exist.

There was a wide variety of shapes: bowls, both flared and globular, stem-cups, pitchers, single or double gourd vases, meiping vases, and small dishes. Typical glaze of the period has a thick texture, called “orange peel”; it does not reflect the light much; the effects of iron impurities are fewer. The shade of the blue varies, and is less intense than at the beginning of the century because of the increase in the use of native cobalt. The small dark flecks are still present.

The flowered scrolls decorating these pieces are more conventional in style than at the beginning of the century. Mythical characters, Taoist symbols: the Eight Precious Objects, the Three Friends (pine, prunus and bamboo), phoenix, lingshi (the sacred fungus) and other subjects are often represented. The dragon is another favourite theme, and is always vigorously painted – the tail is usually spread out and the claws are clearly depicted against a plain white background.

It can be challenging to distinguish between certain unmarked pieces of the Xuande period from those attributed to the reign of Yongle. Some minor characteristics may belay the differences between the two eras however. The shapes tend to be slightly less elegant, with handles being more slender on certain pieces. As mentioned earlier, the floral decoration is plainer and more conventional. On blue-and-white pieces, the blue is less intense and the characteristic blue flecks are less visible. The base shapes are different on certain pieces of the same type: e.g. gourd vases in Yongle period have a oval base, while in the Xuande period the bases are rectangular. The glaze is very smooth and soft to the touch with “orange peel” irregularities.

The copper red wares of the Xuande period enjoy a high reputation and are extremely rare. This red was used since the Yuan period. It is painted under the glaze, much like with the cobalt blue of the blue-and-white wares. However, copper oxide is notoriously difficult to control during the firing process and it often takes on a muddy, brownish tint. Even so, the copper red was highly popular during the early 15th century. Nevertheless, it was not long before the potters abandoned this difficult technique in favour of iron red, an enamel fired in a muffle kiln.

Polychrome wares used only two enamel colours for the decoration: red and yellow, green and yellow, green and red, violet and yellow, yellow and blue. The motifs, dragons, clouds, Taoist symbols, flowers and stylised leaves are usually vigorously drawn and arranged harmoniously across the surface of the object. The polychrome pieces included: small potiches, vases, bowls and cups. Iron red, often in combination with yellow, blue or green, was used instead of copper red very early on in the dynasty. The production of blue-and-yellow wares started in the reign of Xuande and continued popularity throughout the rest of the Ming Dynasty. The yellow enamel glaze served as background for designs painted in blue under the glaze, with a more or less lively drawing style, depending on the date of piece. The cobalt blue appears very vivid in contrast to the yellow enamel background, the bases are typically unglazed and reddened by the firing process.

It is said that the Xuande mark was written by the famous calligrapher Shen Du, as the official mark of Xuande resembles his handwriting. Shen Du was the official calligraphy master hand for the Ming Dynasty and was entrusted with the transcription of the most important official documents at court.