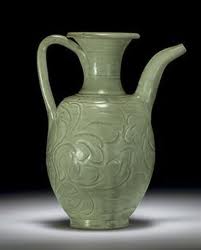 The Yaozhou kilns were established during the Tang Dynasty (618-907 AD); their product line included celadon, black, and white porcelain. From the Five Dynasties Period to the early Song Dynasty, these kilns were influenced by the Yu, Yao, and Yue kilns, and developed celadon with engraved designs. The surviving Yaozhou kiln site was found at Huangbao Town, Tongchuan City in Shannxi Province. In the old days, this area belonged to the Yaozhou government. Its products are distinguished by the three development stages.

The earliest phase produced mostly celadon, and the modelling was rather simple; designs and patterns were still quite amateur in execution and layout.

More Yaozhou wares from the second stage survive to the present day than any other, as the second stage was the height of development of the Yaozhou kilns. Most products from this time were functional, such as bowls and dishes.

The third stage was a lot more eclectic. There were every imaginable types of vessel, including vases, jars, kettles, basins, stoves, incense burners, cup holders, flat bowls, wine pots, and wine pot warmers. The richness in variety of form and model was something that few could compete with in the Song Dynasty.

Like Ding, Yaozhou were decorated using two different methods: carving and moulding. The earlier pieces tend to be carved or incised. The carved patterns on Yaozhou celadon showed strength, precision, and fluidity in knife work and represented a unique style. The motifs of “fish in the sea” and “frolicking duck by lotus pond” were some of the most vivid images. In addition to carved designs, moulded designs were also quite common, these were mass produced so the end result was often less pleasing. Commonly used patterns and designs included floral scrolls or floral sprays of peonies, chrysanthemum, and lotuses. Sometimes, images such as such as phoenixes, flying cranes, moths, and frolicking children were used.

Yaozhou products were geared towards the common people. With its unique local style and quality among porcelain products of its category in Northern China, Yaozhou celadon was often selected as yearly tribute ware for the Northern Song (960-1127) courts.