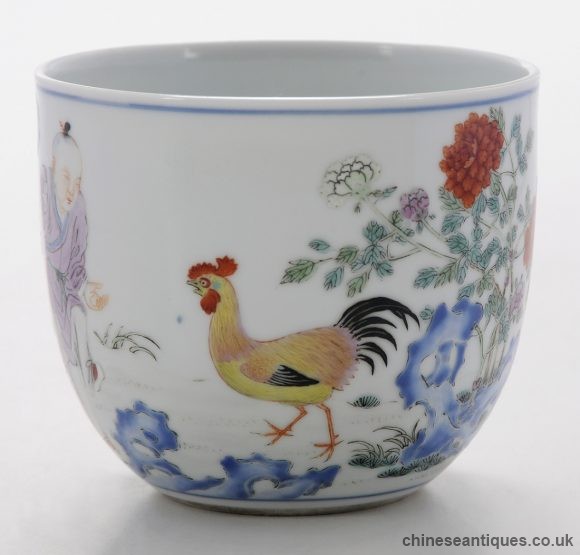 A rare Chinese porcelain cup sold for $180,000 at Brunk Auctions this Saturday.

The Imperial cup features the sealmark of Qianlong in underglaze blue and fine polychrome enameling. It also features an inscribed poem attributed to the Qianlong Emperor which bears the date of the bingshen year (1776).

According to Andrew Brunk, President of Brunk Auctions, “The exceptional sale of this piece of porcelain suggests that Brunk Auctions has extensive reach in the Chinese market. We are delighted that this fine cup sold for a price comparable to similar works at New York Auction houses.”

Closely related examples have been sold by Sotheby’s and Christie’s and have been exhibited in the Arthur M. Sackler Gallery of the Smithsonian Institution, the British Museum, and in the National Palace Museum in Taiwan. 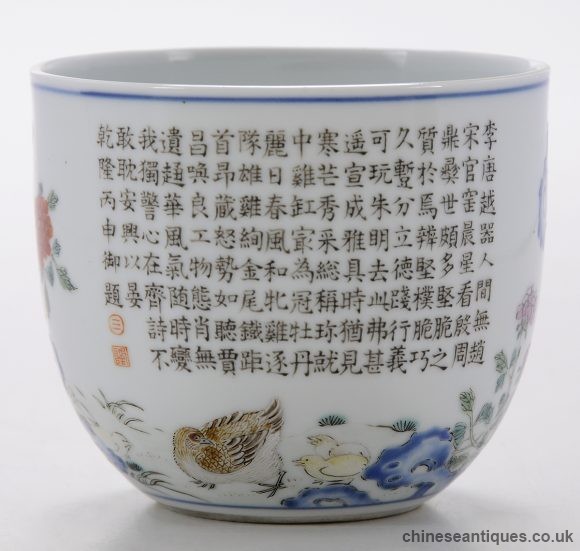 The cup was collected by Doctor Walker Gill Wylie (1848-1923) and descended in his family before being consigned to Brunk Auctions.

The Chinese porcelain cup sold to a private phone bidder, after strong bidding from multiple bidders participating in the room, by absentia, on the phone and on the internet bidding platform Bidsquare.

Cups of this type are based on earlier Chenghua doucai prototypes such as the pair of cups of similar shape, but decorated with chickens only, included in the Illustrated Catalogue of Chinese Government Exhibits for International Exhibition of Chinese Art in London, vol. II, Porcelain, 1948, p. 130, no. 171.

The mark on the base of all of these cups reads Da Qing Qianlong fanggu, which translates as ‘made in imitation of antiquity in the Qianlong reign of the Great Qing dynasty’. The imitation of antiquity, or archaism, was a theme close to the Qianlong emperor’s heart and a considerable number of imperial art objects in a range of different media bear this mark. The correct rendering of the mark was given by D. Howard and J. Ayers when they included the current cup in their catalogue of the Mottahedeh Collection, Chinese for the West, London/New York, 1978, vol. 1, pp. 171-2, no. 165, in which they date the cup to the Qianlong reign. A cup of this type was also published as dating to the Qianlong period by S. Bushell, who translated the poem in Oriental Ceramic Art, New York, 1899, pp. 49-51.

The poem inscribed on the cups mentions a man by the name of Zang Ping, who lived during the Muzong reign (r. AD 926-33) of the Tang dynasty. Zang was famous for the large cockerels he reared to take part in the cock fights that took place during the Qing Ming festival. However, the youth depicted on the cups may instead represent Jia Chang (b. AD 713), who was a child prodigy. At the age of thirteen he was such a talented trainer of fighting cocks that the Tang dynasty emperor Xuanzong (r. AD 713-56) employed him to train the imperial fighting cocks. The design on these cups is therefore often known as ‘the precocious boy’.