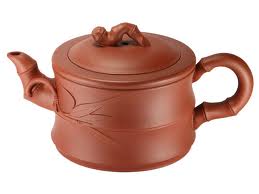 The Yixing area of Jiangsu Province has a long and distinguished history. Yixing was situated at the junction of the Suzhou, Zhejiang, and Anhui provinces, next to the famous Taihu Lake. Legend has it that Yixing was founded by Fan Li, a senior official in the Kingdom of Zhao. He made a fortune making pottery there and was given the title Taozhugong, or “the porcelain gentleman”; the kiln workers of Yixing used to call him “father of pottery.” However, archaeological evidence shows that Yixing had been a production site of pottery since the Neolithic Age. The pottery of Yixing began to achieve popularity after the Ming Dynasty, as one of its towns, by the name of Shuye, crafted the single coloured, undecorated Zisha pottery.

From historical records, we have evidence that a kind of purple clay vessel was created as early as the Northern Song Dynasty. It is easy to see the long history of Zisha, which literally means “purple sand.” This type of pottery had a finely textured body, with iron content as high as 9%. It was fired at temperatures around 1,200 ° C, and appeared reddish-brown, maroon, or dark purple. Its density and hardness were quite outstanding, thanks to the purple and red clay in the Yixing area.

Zisha clay is a type highly moldable and viscous clay, which can be easily molded to a desired form. It can be used to make tea ware, stationery ware, wine ware, tobacco ware, flowerpots, and other vessels for daily use – it is highly functional and practical. Zisha wares are not glazed and have fine pores on the body. Its body has a relatively high water absorbency and good diffusion abilities for air and other gases. Modern scientific studies have shown that Zisha pottery will let air pass through its walls but not water. Thus Zisha ware is great for sealing in the fragrance of tea, and keeping the roots of flowers and plants strong and healthy.

Early Zisha wares were usually pots and jars, with rather coarse bodies and rough forms. It was mainly used by the common people for the purpose of heating water or brewing tea before the name became synonymous with exquisite tea sets and elegant display ware. Around the seventeenth century, Zisha pots evolved from the round or square forms to much more natural and compelling shapes that resembled flowers and fruits – the literati and tea aficionados loved the newer Zisha ware. These natural forms include the pumpkin pot, polygonal bamboo pot, sunflower-shaped pot, Buddha’s palm pot, river snail-shaped cup, pomegranate case, and lotus leaf jar. In the design of its form, both aesthetics and functionalism were considered: a beautiful design feature can be more than meets the eye. The designs for these elegant forms were in several main categories, which were vegetables, fruits, bamboos, insects, shelled molluscs, birds, and wild animals. The “melon-shaped pot” by Ming artisan Chen Hongyuan and “pot with bamboo designs and eight trigram markings” by Qing craftsman Shao Daheng are the better known pieces of work known today.

Before the Tang Dynasty, tea vessels and food containers were not so clearly distinguished. As the fashion for tea drinking caught on, the craftsmanship and creativity in design of tea wares improved with each day. By the end of the Tang, the Zisha teapot (the ideal tea ware) had appeared. The Zisha teapot was produced in Yixing. This was a celebrated tea production area, and many prestigious types of teas were collected here as Imperial tribute for the courts. The rise and development of Zisha pottery was closely tied to tea production areas, the fashion for tea drinking, tea brewing techniques, and changes in tea ware. It is clear that the popularization of tea as a beverage in the Song Dynasty and the promotion of tea drinking by the scholars and officials were direct incentives in the maturing of Zisha craft.

Other well-known tea wares, such as the black glazed tea ware of the Jianyang kilns in Fujian Province, also benefited from the popularization of tea during the Song Dynasty. The glazed tea cup produced by Jiangyang kiln is black in colour with a hint of red and has natural, hair-thin grains in the porcelain. Its relatively thick body makes for a good way to keep the temperature of the tea warm. In another area, the literati class of the Song Dynasty was often engaged in “tea battles.” The Jian black porcelain tea ware became the undisputed “must have” tea ware for such activity. Therefore, the Jian kilns at one time were the special supplier of glazed black tea cups for the Imperial court. One may find the names Youdi and Tuhao, two kinds of black glazed porcelain, often mentioned in ancient literary works. These were the types of black tea ware most favoured by the scholars of the time. They were made in the style of Jian black porcelain, and deeply influenced the Japanese tea arts and porcelain-making industry. The “father of Japanese ceramics,” Kato Shiro, had once studies porcelain crafts in Jianyang.

Yixing Zisha tea ware began in the Northern Song Dynasty. By the Ming Dynasty, teapot making masters were abound and produced Yixing Zisha teapots of striking designs and imposing style. The popularization of Zisha pots from the Ming Dynasty onwards was obviously connected to tea drinking customs. Bunched, compressed tea was replaced by loose tea leaves; rather than mixing bunched tea with water to form paste, water began to be added to tea leaves to brew tea. As tea brewing vessels, small cups were no longer considered clean and heat-preserving, and were suspended by the teapot. Especially by the mid-Ming Dynasty, as people demanded more visual appeal, fragrance, and taste from tea, the criteria for teapots came to be based on the principle “small is better than large and shallow is preferred over deep.” Therefore all Zisha teapots aimed at miniaturization with an air of elegance. The highest ideal artistically would be to have a beautiful teapot and fragrant tea.

Brewing tea in small pots had been a trend of the sixteenth century, with well over 400 years of history. Using a Zisha teapot has the advantages of slower heat loss, less chance of tea fermentation due to the ingenious air aperture in the lid which prevents water droplets forming and falling down into the tea. The body is highly resistant to heat and cracking, since it has already been fired under extremely high temperatures. The longer one uses a Zisha teapot, the more extraordinary its body and shine becomes; the tea brewed in it becomes increasingly fragrant and flavoursome. The most knowledgeable tea and teapot lovers liked to use specific teapots to brew particular types of tea, so that each teapot retained a pure fragrance of its corresponding tea.

A unique feature of Zisha pottery, which differentiated it from other ceramic products, was its name, as pieces were often named after their maker. If the maker was a famous master of ceramics, the price of the piece would soar. Gong Chun, a man of the Ming Dynasty, was one such master teapot craftsman, who promoted the status of Zisha ware from an age-long traditional product to a universally acclaimed art form. It was said that Gong Chun learned ceramic crafts from monks. His teapots were maroon in colour and regular and solemn in form, meaning that his teapots resembled the metallic vessels used in ancient times. Gong Chun was known throughout the land and the Gong Chun pots became a system of pottery in themselves. After Gong Chun, many other skillful and renowned Zisha makers emerged. In the Ming Dynasty, there were the “Three Da’s” (three artisans with the character “Da” in their names), as well as Chen Yongqing, Chen Zhonmei, and others; in the Qing Dynasty, there was Chen Mingyuan, Yang Pengnian, and Shao Daheng. However, the original works by these masters are extremely rare today.

Since many literati and people of taste directly participated in the design and making of Zisha teapots, they were decorated with calligraphies of poems and prose, paintings, seal prints, and sculptural elements, infusing them with high artistic and cultural values. Every Zisha teapot is a collection of people’s interests, emotions, and attitudes towards life. What the teapot and the tea provide is not merely the sense of taste; an eternal bond and love for the tea ware and tea is formed. Zisha teapots from Yixing made by the hands of master artisans are worth their price in gold. Collecting teapots and refining their body and fragrance over time, with each use, has always been considered an elegant hobby in China.