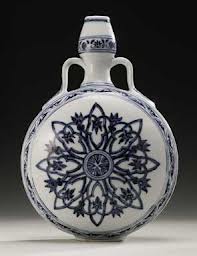 NEW YORK, NY.- Yesterday at Sotheby’s the Fine Chinese Ceramics and Works of Art Sale brought the outstanding total of $26,985,314. The total significantly exceeded the pre-sale high estimate of $21.6 million and was nearly 20% higher than the equivalent sale last year. It is also the second highest total for a various owner Chinese Works of Art sale at Sotheby’s New York. Among the highlights of the sale were An Important Wucai ‘Fish’ Jar And Cover, Jiajing Mark And Period consigned by the Walters Museum in Baltimore sold to benefit the Asian Art Acquisitions Fund which sold for $1,986,500 (est. $500/700,000) and A Rare Blue And White Moonflask, Ming Dynasty (Bao Yue Ping), Yongle Period – which was discovered being used as a doorstop in a Long Island home – which fetched $1,314,500 (est. $600/900,000).
Henry Howard-Sneyd, Vice Chairman, Asian Art at Sotheby’s said: “This is the highest total for a various owner Chinese Works of Art sale at Sotheby’s New York in over five years. The exceptional $27 million total is a testament to our global team work and especially the strength of the New York department which is now led by the recently appointed Dr. Tao Wang. This New York sale is the first major auction in this category globally this season and is a good indicator of the continuing international demand for the very best Chinese Art.”
Dr. Tao Wang, Head of the Chinese Works of Art Department at Sotheby’s New York said: “I am thrilled with the result of the first auction I have attended at Sotheby’s. We saw exceptional demand across the sale which drove the total to such heights. Collectors from around the world were drawn to high-quality pieces with distinguished provenance particularly that of museums as can be seen with the $2 million Wucai ‘Fish’ Jar And Cover from The Walters Museum and the property from The Masaki Museum in Japan, as well as the large number of private US collections represented in the sale.”
A recently discovered Rare Blue And White Moonflask (Baoyueping), Ming Dynasty, Yongle Period sold for $1,314,500 (est. $600/900,000). The piece had been in the same family collection for decades and came to light when the owners saw a similar piece in a Sotheby’s advertisement. The Moonflask was kept on a wooden stand and was used as a doorstop in the family’s Long Island home.
The historical artifacts in the sale were led by An Imperial Jade ‘Ba Zheng Mao Nian Zhi Bao’ Seal, Qing Dynasty, Qianlong Period, which sold for $3,498,500 – the highest price of the auction (est. $800,000/1.2 million) and of the week in New York so far. Other highlights included the exceptional selection of bronzes in the sale such as An Important Archaic Bronze Wine Vessel (Hu), Eastern Zhou Dynasty 8th / 7th Century BC from a Japanese Private Collection which trebled the high estimate to fetch $1,538,500.
Another discovery in the auction was A Pair of Huanghuali Yokeback Armchairs (Sichutou Guanmaoyi), 17th century that came from the Collection of St. Matthias Church, Victoria, British Colombia, Canada and sold for $758,500 (est. $180/250,000). The chairs were given to the church some time ago and were frequently used by clergy and the congregation.
Buddhist art also performed well with An Important Gilt-Bronze Figure Of Buddha, Northern Wei Dynasty doubling the pre-sale estimate to sell for $1,172,500 (est. $500/800,000) and A Large Limestone ‘Longmen’ Head Of A Bodhisattva, Early Tang Dynasty, 7th Century fetching $992,500, several times the $40/60,000 estimate.