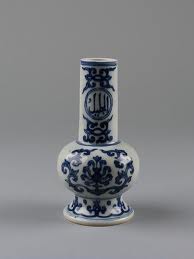 Emperor Zhengde was the 10th Ming ruler and the only surviving son of the preceding Hongzhi Emperor. From a young age he was thoroughly educated in Confucian literature, and showed great promise as the leader of the Empire. Unfortunately, this turned out to not be the case. As opposed to his father, Zhengde was more interested in pleasure-seeking and personal fulfilment. He became notorious for his irresponsible behaviour, and reckless spending which led to political corruption within the court. Emperor Zhengde died in 1521, after a boating accident which led him to falling into the lake and later succumbing to illness as a result.

The reign of Zhengde marks the end of the classical period of the blue-and-white porcelain. At the start of the era, dragons still appear entwined with flowered scrolls, with stylized motifs. The decoration on dishes and on a few vases, with a thickly decorated raised rim, is pinched and overloaded. The blue has a greyish tint, and the glaze is cloudy. These pieces bear the Imperial mark in either four or six characters, inscribed within a double circle.

In the second part of the reign, a characteristic of the decoration is the use of Arabic or Persian script, as well as quotations from the Koran. This development is explained by some scholars as a reflection of the importance of the Muslim communities in China, while others consider it to be due to the growing influence of Muslim eunuchs at the Imperial court. The traveller Ali Akbar even claimed that the Emperor himself was a convert to Islam.

This is not the first time that the Middle East influenced the development of Chinese porcelain. The characteristic cobalt blue of the early blue-and-white wares came from Persia and was used for a prolonged period before being sourced locally. Some of the typical pieces with this decoration are small utensils for the writing table: writing cases, brush holders, boxes, screens, vases and candlesticks. Other notable pieces include incense burners and standing chandeliers, also inscribed in Arabic script. For some unknown reason, these pieces always have the dynastic mark written in six characters.

Whether they were made for the Imperial palace or for the Muslim community, the wares of the Zhengde reign vary in quality from the most superb, (comparable to the best pieces of earlier periods) to the mediocre, foreshadowing the decline to come.